September 21s, Ontario Hydro requested a rate increase to cover the cost of operating and maintain smart meters. As a consumer, I am outraged!

When technology is implemented as a means of making services more cost effective, and that same technology results in a rate increase, that is not progress!

If you are not familiar with smart meters, Hydro introduced them recently as a way to influence consumer demand and shift more of the load to off-peak hours. Presumably this allows the hydro company to service that demand using existing capacity, rather than build more generating stations.

For this to work, consumers must buy in to the benefits of “off-peak pricing.” The carrot is that you can reduce your own Hydro bill. 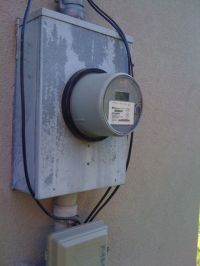 In my household that meant buying a programmable dishwasher that could be set to start at 2am when rates are low. The Return on investment calculation around buying a new dishwasher was based on newer models being more efficient, but also being able to easily take advantage of off peak pricing since the dishwasher could be automatically scheduled to take advantage of cheaper rates.

Now, Hydro has to raise the rates in order to maintain the smart meters, and as a result, charge me more. That’s not progress, that’s just technology for technology sake!

Of course, Hydro will also argue that there is another benefit of smart meters to consumers. Hydro can turn down your air conditioning during the day when no one is home, thus saving the consumer even more money.

Isn’t that nice. My own inexpensive programmable thermostat that turns down my air conditioner when I want it to, becomes redundant; Hydro will do it for me…IN THE MIDDLE OF THE DAY WHEN I AM WORKING AT MY HOME OFFICE! It makes me chuckle.

Like a drummer who gets irritated when a natural rhythm in the environment is off beat, or a musician that is sensitive to tones that are out of key, I become hypersensitive to service changes that are not well thought out.

Ah the joys of being a consultant who advises companies of how to plan and deliver services in an efficient and effective way that maximizes value and reduces cost. I become buried in the millions of improvement opportunities that I see around me every day, and this is just one more glaring example.

Wayne McKinnon works with organizations to change their course of evolutions from extinct to distinct
View all posts by Wayne McKinnon →
This entry was posted in Where is the value?. Bookmark the permalink.