Over ten years ago we moved from the crowded suburbs to a dream location on the Rideau waterway just outside of Ottawa. Between 1826 and 1832, our particular stretch of river became part of the Rideau Canal system that links the Ottawa to Kingston. (In fact you could travel all the way to Florida from our back yard without ever going in the ocean).

Kingston, located on Lake Ontario where it meets the mighty Saint Laurence River, was the capital of Canada at the time. The route from By-Town (now Ottawa) was constructed as a supply route to Kingston. (The route was identified as a good idea during the war of 1812 between Canada and the United States).

Cargo could travel from Montreal, up the Ottawa River, down the canal systems of lakes and rivers, and in to Kingston. This was to be a much safer route than taking the Saint Lawrence River, with American shooting at the steam vessels during the war.

The Canal system was not finished (in fact, not even begun) until after the war.

Our stretch of river has been the home of a water ski club since the 1970s or earlier. It was a perfect place to move to and raise our kids.

This year we found out that our enjoyment of the waterway is threatened. Parks Canada is proposing a no-wake zone for our stretch of the river. No more skiing off of our dock.

The majority of the homeowners that I have spoken to in this area have commented that they enjoy seeing the boats and kids enjoying themselves on the river. There are also a few who do not. This issue has pitted the swimmers, the canoers, the boaters the kayakers and the fishermen against each other. People who have never been in a kayak complain that the boats are disturbing the kayakers. We have canoed and kayaked here for years. In a canoe boat waves are a nuisance. In a kayak the waves are a non-issue. 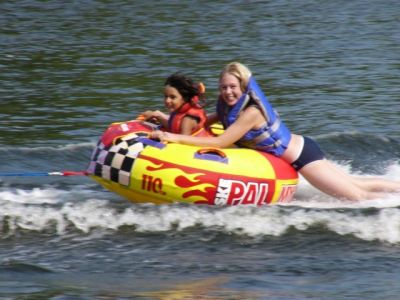 There is a lot of mis-information around this issue, and my fear is that we will see another law in place as yet another example of a knee jerk reaction to a perceived situation that could be resolved other ways. There are already laws. There is also common sense that could be applied.

While many boaters are responsible and alert, a simple swim buoy anchored by a home owner at a reasonable distance from shore is a simple way to protect swimmers from the few careless boaters, just like swim areas have been using for years.

People also complain about big off shore style race boats. In my experience, they come by once a year, usually around Canada Day on their way back from the down town festivities. Some find this troublesome, while others find this once a year event exiting.

One of my roles in my consulting business is to advise senior management on how to assess risk. Let's be clear, this is a separate discussion from personal likes and dislikes.

The two primary factors in risk management are likelihood and impact.

So what can be done?

The two primary options for dealing with risk are not just elimination, but also simply risk reduction. In other words reducing the likelihood or the impact to an acceptable level. Too many times total elimination is seen as the only way, and one person’s personal preference is often regarded as more important than tolerance for each other.

As for the tools, enforcement is often seen as the only way, when awareness could be used as a tool to provide positive results.

In order to reduce the risk of a canoe being disturbed by a boat, here are some potential ways of mitigating that risk:

This is just one example, but the same approach can be applied to any issue, weather those issues are on the river, the shop floor, or the executive suite. 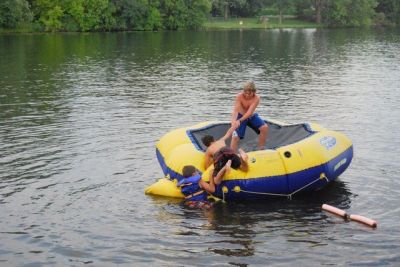 Kids getting along and working together

Wayne McKinnon works with organizations to change their course of evolutions from extinct to distinct
View all posts by Wayne McKinnon →
This entry was posted in Leadership. Bookmark the permalink.