Growlers – How Do You Adapt to Change?

Well, today I learned even more about Growlers. I had the spelling all wrong, but pronounced correcty. It seems that it is an evolutionary thing (in both species and language).

Q- What do you get when you cross a Grizzly bear with a Polar bear?

A- a growler! (...which apparently sounds more menacing than a pizzly). 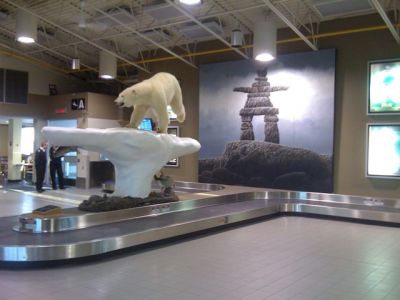 The result of Grizzlies following the caribou further north (now that recent years have been warmer), and the polar bears (left without summer ice to hang out on the way they used to).

BUT WAIT - before anyone gets their global warming nickers in a twist lets consider this:

The grizzly bear is thought to have descended from brown bears that came from Russia to Alaska. According to wikpidia this happened 100,000 years ago, and they lived in the north for 87,000 years. Somewhere along the way they evolved into grizzly bears and moved south 13,000 years ago.

So here we are many years later and the grizzlies have come back to visit their relatives who stayed behind and evolved into polar bears. The two meet again and apparently hit it off quite well.

The real question is "where were the environmentalists 100,000 years ago when we needed someone to prevent the Russian bears from crossing over as a result of global cooling?"

Perhaps they should have also been around 13,000 years ago to capture and isolate these odd offspring before they migrated south?

With all this ice disappearing, the polar bear is adapting by selecting a mate that gives them brown paws like a grizzly and white coats like a polar bear. Presumably this will be an advantage when it comes to hunting the offspring created when ringed seals from the west meet harp seals from the east for the first time.

Things change. The real question is how do you adapt to change? In the corporate world as in nature, things do not need to continue to exist in their current form simply because they always have. Sometimes new entities are created that are better suited to the current environment than are the old form that they replaced.

Wayne McKinnon works with organizations to change their course of evolutions from extinct to distinct
View all posts by Wayne McKinnon →
This entry was posted in Adapting To Your Surroundings. Bookmark the permalink.