Worth a Laugh – The value of living closer to home.

It is Friday again and here is this week’s representations of value that made me smile:

Heard in radio advert: “The convenience of a down town condo right here in the suburbs.”

The inference being that your new condominium apartment is close to home so that you don’t have to go all the way downtown to get there. Going downtown to get to work is already hassle enough.☺

Good marketers understand high value, even if it is imaginary. I hope yours is real…

We are Different, We have this History… 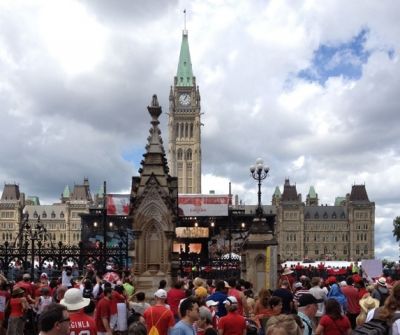 When I am invited in to companies to help them improve their services or their ability to deliver those services, the first step that they all seem to insist on is to bring people together with me in a room and tell me how it is. The conversation always starts the same ways, usually with the exact same phrase:

We have some unique challenges. "You see, we are different. We have this history…"

Sometimes that history dates back to so far in the past that it should no longer be relevant, but they continue to allow it to influence their attitudes and the way that they do things. It is remarkably similar to the way that countries behave.

This past week the United States of America celebrated Independence Day on July 4th. Meanwhile Canada celebrated Canada day on July 1st. Conveniently this gives us a mutual long weekend to cross each other’s borders and join in on two parties on the same weekend.

Independence Day –(From the US National Archives web site):
“Here, in exalted and unforgettable phrases, Jefferson expressed the convictions in the minds and hearts of the American people. The political philosophy of the Declaration was not new; its ideals of individual liberty had already been expressed by John Locke and the Continental philosophers. What Jefferson did was to summarize this philosophy in "self-evident truths" and set forth a list of grievances against the King in order to justify before the world the breaking of ties between the colonies and the mother country.”

Note that in 1776 it was important to include grievances against the King, and the tea party held in his honor is well known.

In contrast, Canada day marks the anniversary of the day that with British permission, the people in Canada decided to join together as a country.
In 1867 there was no need for a war to decide this. By that time the British Monarchy was open to negotiations and signed the British North America Act declaring Canada a Dominion. Interestingly, Canada no longer celebrated Dominion Day. Instead, in 1982 the government, by Act of Parliament renamed the day to Canada day. Some say this was outrageous and ignored proper history of the forming of a dominion by the British subjects who lived here, while others including the government of the day, recognized that what is important is to include all people across Canada in the celebrations of Canada and it’s divers population and common values.

At the time, I had just graduated from high school and didn’t really understand the significance, but many years later, my daughter came to me with her history book and asked, “why do they make it sound like the British were bad?"  I hadn’t remembered that from my History studies, but it turns out that since she was schooled in French, she was reading from a different History book than I had at my English school. Yes, Canada has this history, but the conflict is not what is significant in my mind. What I do think is significant is the joining of two peoples to form a new country with a new way of doing things.

Fast forward to this past week and the Canada Day celebrations on Parliament hill in Ottawa and here we are in 2012 “celebrating the anniversary of the war of 1812, Canada’s only major conflict with the United States, (which by most accounts ended in a draw). This year the Canadian Government decided that it is important to remind everyone of this conflict and how Canada stood up to the Americans. I have no idea why it is necessary to highlight the battles. Apparently in some parts of the United States the same celebrations took place but from a different history book.

Growing up in Canada I always felt that the border was just a formality. A border that you used to be able to cross with just a driver’s license, and Canadians Americans frequently did so, and continue to even though it is a bit tougher today.

It isn’t just the history books in school that keep these conflicts alive. Religious texts also tell the story of history that is much farther in the past, yet, because it is written, we must remember to hate one another. I don’t get it. How is this useful?

Today, if there is conflict between the French and English in Canada, or between Canada and the United States in North America, or in your own organizations between the product development folks and the operational support teams, you’ll know why. It’s because, as you know, “we have this “history.” How about focusing on the positive elements of that history instead?

Canada and the United states have been strong allies and trading partners. Is it not better to focus on how after the war of 1812, the two nations came together to live in harmony along the longest undefended border in the world? Why broadcast the detailed ugliness of past conflicts and brutal acts?

My favorite US/Canada story of partnership was from World War Two. Canada had come to the aid of its allies in Europe. The United States had not yet joined the war, but The United Stares Air Force conveniently parked a few Bomber aircraft too close to the Canadian border one night. Mysteriously when the sun came up, the bombers were missing. Stolen for use in the war it turns out, by those pesky Canadians that you just can’t trust.

When it comes to preserving history, companies are no different. What is your favorite story to share that illustrates the positive aspects of working together and providing client results in the history of the organization that you work for? Has there been some defining moment?