Is there a difference between Exercising your Rights and Being Dead Right? 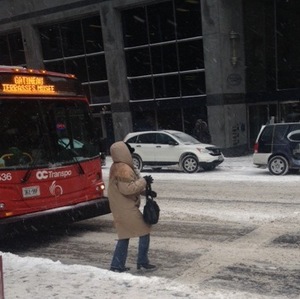 There are many business situations where service providers (internal or external) are seen as roadblocks to progress because they do not act quickly enough. Sometimes these sentiments are dead-on, but other times they are taking additional steps because it is necessary to assess risk.

When I was growing up I was taught to respect my elders, walk on the left hand side of the road facing traffic, and to look both ways before crossing the street.

The other two parts had to do with situational awareness in order to minimize risk.

This morning on my way downtown during a snowstorm, I witnessed a number of close calls where pedestrians stepped off curbs without even attempting to look.

This bus picture is one example, but in another more dramatic case, a sliding vehicle was heading directly for a pedestrian who had just stepped off the curb. The driver honked the horn to get the pedestrian’s attention to no avail. The pedestrian didn’t even glance in the car’s direction. Instead she just gestured towards the yield sign indicating that pedestrians had the right of way, and kept walking. As I watched in horror, the car narrowly avoided her. As she walked away I am absolutely positive that she had no idea how close she had come to losing her life, or at least becoming a hood ornament.

In the corporate world we see the same obliviousness to risk. If the process of crossing an intersection involves a step where one assesses the risk before going forward, then why do business units not feel it necessary before making significant changes?

Perhaps the corporate elders act more as enforcers with zero tolerance to risk, rather than trusted advisors? Assessing risk need not always be cumbersome. Sometimes it is as easy as simply looking left and right, and that step should never be skipped. What you chose to do about the risk is another matter, but lack of awareness is foolish.

As a kid I also learned that the phrase “I didn’t know” was countered by “you should have known better.” Unlike our pedestrian friend, business leaders are expected to know better.