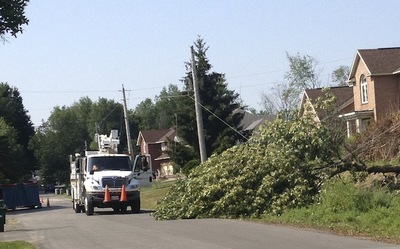 The building I had planned to work in today had problems with its air conditioning so I elected to work in my home office. About an hour into my day, my air conditioner suddenly shut down along with all the power in the house.

I glanced outside to see the hydro lines bouncing and a construction crew scurrying about. Once the excitement was over they went back about their work. Using my keen problem management skills I ascertained that the root cause of my power outage was a line shorted by something hitting the power lines, and picked up the phone to report it.

That's when it dawned on me that the portable phones that we have require electricity to work. Fortunately I had cell phone coverage.

But wait, it gets better!

I called the utility company's automated attendant pressed one for this, two for that, and eventually my outage was recorded. I then received a message that if I had further information that would help them troubleshoot this incident, to stay on the line and speak with an attendant.

In mere moments an attendant responded and asked me the nature of my call, recorded all the same information that I had just entered, and then seemed uninterested in the vital information that I was able to provide on why the outage occurred so that they would be able to resolve the incident more quickly.

Only somewhat satisfied that I had done all I could do, I returned to work on my battery powered laptop computer, only to be interrupted by the house phone ringing somewhere off in the distance. Dashing from floor to floor, I discovered our only non-portable phone in the house that I had forgotten that we still had. On the other end of the line was a helpful person from the field service group informing me that there was a power outage on my street (big news). He said they had no idea why, and would be dispatching a crew. He speculated that that some animal must have crawled inside the distribution box.

I've had it! I'm packing up and finding a third location to work from today. I sure hope they have coffee, air conditioning and efficient process for service delivery...

Gut wrenching or going with your gut

Much has been written on the benefits of going with your gut, and the worst decisions tend to be ones where your analytical mind is telling your one thing but your gut is sounding off all sorts of alarms, so, yes, going with your gut has some validity, however:

1) Are you going exclusively with your gut or is your opinion informed?
2) Do you know why you are comfortable or uncomfortable with a situation?
3) Have you confronted the facts?

I could list a myriad of additional questions to consider but my point is that there is a vast difference between going with your gut because it is sending off warning signals, and simply feeling that everything will work out fine because you feel it.

Facts are facts. You can't ignore them yet many people chose to, and they make their gut the scapegoat for ignorance of the facts. How a person processes the facts is an entirely different discussion from accepting the facts.

She saw herself as a third type, the realist, and recognized that if she stayed around long enough someone was going to have to wash that glass. Funding cuts had been announced. Some workers were pessimistic and wrung their hands as they waited to lose their jobs, others were optimistic that their value was significant enough that they would not be affected at all. Meanwhile my executive mentor wisely began making plans and taking swift action to make changes within her control before someone else imposed changes out of her control.

Your gut may guide you, but seeing people ignoring the facts gives me a stomachache.