When I work with organizations to improve their ability to deliver services there are two acting forces that I typically encounter:
1. Inertia
2. Erosion

Inertia is an objects resistance to change. An object in motion stays in motion, and an object at rest tends to stay at rest. This rule applies equally to People.

My definition of erosion describes objects continually trying to return to the earth. Erosion applies equally to riverbanks and service improvements. Cars are another example. Cars are made out of steel, steel is made from iron ore, and iron ore is found in the dirt. If you leave a car alone long enough it will turn to dirt.

Many improvement initiatives are temporary and return to dirt. Here is one example that I captured using time lapsed photography:

In photo one, you can see the results of an improvement initiative one organization used to decrease the time it takes as well as reduce the errors that occur when connecting equipment. Attaching coloured dots to each connection to indicate which wire goes where, and then documenting the configuration makes their setup process more efficient and effective. 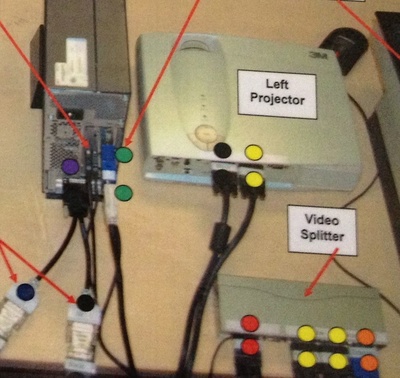 This improvement initiative provided positive results and apparently had enough inertia to remain unchanged for quite some time. Inevitably erosion set in. Picture 2 was taken years later, and it appears that quite a bit has changed.

It takes a trained eye to notice the difference, but those of you with advanced skills will not only spot the change in markings, but also the rogue letter escaping from its cable. Improvement ideas are like baby sea turtles. Once they are hatched they immediately begin their journey. This little number has already begun its journey to return to the earth. If all goes as planned, in a few weeks it likely will likely turn to dirt and get swept up in a dustpan.

What you have just witnessed is a true story that I uncovered as I walked the halls of one organization. How did this happen? Perhaps someone ran out of coloured dots at some point? Was the erosion slow and gradual, or was there a specific event that triggered the change? Perhaps a second improvement opportunity suggested by a worker afflicted with colour blindness caused this change?

Improvements are not the type of thing that you can set and forget. You have to be constantly trying to improve. Changes must be evaluated in some way to see if they are likely to make the situation better or worse, and then measured once the change has been made. When you stop improving, erosion is inevitable.

I am seeing a pattern here...

In the last few years a number of significant size projects have come my way when the organization hired technical consultants to design and implement new cloud based solutions. In every case the technical project lead to a meeting with me to diagnose problems with these stalled projects. In every case it became clear that the root cause was organizational, and not technical.

"Like choosing a Swiss Army Knife for their jobs, people select tools with a rich set of features just in case they might need them. They don't know if they will need them because they don't really understand everything that their jobs entail, or what services (versus tasks) their clients value from them. Day by day they rely on these tools (and other people) in order bail them out, or to help make things up as they go (over and over again). Would it not be more efficient to figure out specific work patterns and address them once?" - Wayne McKinnon