Airports are boring places to spend much time in. When I was working in London England I was told that if you stay in Leicester Square long enough, eventually you would meet every person that you have ever known. In old England apparently everyone passes through the square eventually.

My own interpretation of that story is that the modern version of the square is terminal two at Heathrow airport. Having spent time there on many business trips to Europe, I now believe that terminal two is the biggest bedroom in the world, with more travellers from every continent overnighting on the benches or curled up in a corner, than anywhere else in the world. Affluent perhaps, but temporarily, homeless people none the less. Spend time in terminal two and you will meet everyone that you have ever known, and many that you haven’t.

Where am I going with this story? Well, it begins with me sitting on a bench in an airport terminal on my way back from Norfolk Virginia. I’ve flipping through the latest copy of Road and Track magazine just to kill time, and I stumble across an advertisement for www.ResumeEngineering.org. It is a sight for military veterans and is sponsored by the US chamber of commerce. The sight includes this video

This discovery takes my mind down one of the many wormholes in time that I frequently find myself pulled in to.

Wormhole stop number 1
On this trip I am returning from an engagement with a group of very bright military guys at NATO. NATO is the North Atlantic Treaty Organization, made up of 28 member countries. I’m addressing a small group of decision makers from Norway, France, Italy, Turkey, and the United States. My liaison officer is German and I’m Canadian.

As a consultant I visit a lot of different organizations, military, government and private industry. They all claim to be different. Among this diverse group we all agree that the issues are all the same.

Wormhole stop number 2
I discover that this tangent that my mind has taken has a military theme. I think back to the time that I was invited to the top office of Canada’s military, the Canadian Minister of National Defence. Someone in his office had read one of my publications on personal productivity and he sought my assistance.

As I think about this I realize that the Minister’s Office is not really the top office of the Canadian military. That office is held by the Queen of England in the role of The Commander-in-Chief of the Canadian Armed Forces. The Queen’s representative in Canada is the Governor General of Canada, and, just to show you how strange things can be in my world sometimes, as I think this, I glance across the isle from where I am sitting at the airport and there sits a woman bearing a striking resemblance to Madam Jean, Canada’s 27th Governor General. Madam Jean no longer holds that post. If it is she I assume that she is returning to Canada to prepare for the upcoming Canada Day celebrations. Sure enough, later that evening when our flight arrives in Canada, her entourage is there to greet her. I should have asked for a picture together.

Wormhole stop number 3
My mind drifts to its next stop at which point I find myself recalling that the Queen’s son, Prince Andrew went to the Military College in Canada. I have presented at the same college. I have also consulted at the nearby armed forces base, invited in by a Lieutenant Colonel (in Canada pronounced Leftenant.) He treated me as a respected peer.

Why is it I wonder, that I as a civilian can skip rank and engage a military leader as a peer at their level (whatever the level), while military staff have more difficulty entering private industry in positions appropriate to the experience and level of responsibility that they have held in their military career?

I have met many talented retired military captains working below the level of line manager in industry. What a waste of talent and leadership abilities, yet many of the civilian managers and directors in private industry play internal turf wars driven by ego, fear and lack of decision making abilities.

Wormhole stop number 4
I think back to my previous business trip, sitting at another airport terminal where I met a person who is part of a team tasked with solving these sorts of problems. The Director is with the US Department of Labour turning veterans, Reservists and National Guard Members into strong productive members of America’s civilian work force. We had a conversation about this and she enquired about my work in helping teams and individuals move to work of higher value. I make note to send her an excerpt from the book that I am working on. Perhaps it can help someone make the transition to the civilian workforce.

Wormhole stop number 5
As a kid I remember the adults talking about Civvy Street. This apparently is where the civilians lived. When I was very young I wasn’t really sure what a civilian looked like, and I always wondered where Civvy Street was. According to the adults the money was better there. I wondered if it was the street with the big houses just a few blocks away from where my dad’s friend Hugh lived.

Hugh grew up with my dad and together they joined the forces and saw the world. I’ve known Hugh all my life, and when I grew up I learned that Hugh made it to Civvy Street. Hugh essentially ran the air force for a mining company.

Hugh assembled a fleet of aircraft to deliver parts, materials and personnel to the Canadian north, as well as overseeing the aircraft maintenance program. As a V.P. in the company he was not only operationally focussed, ensuring that weekly supply flights and crew were delivered to the mines on time, but also innovative in his approach, eventually pioneering the use of ice roads across the frozen lakes to create supply lines to the mines. It was easier to create a road across a frozen lake than it was to build and maintain roads on the frozen tundra. Hugh surveyed the lakes from above and using a helicopter, simply connected the dots by hovering over the next spot while a snow mobile broke the trail. People told him it couldn't be done. To get it done, Hugh essentially served as a beacon and set direction as any good leader would.

When I met with Hugh a few years ago on my way back from Yellowknife, in Canada’s North West Territories, the T.V. show ice road truckers was sensationalizing the notion that these roads were somehow unsafe. This agitated Hugh. His military experiences lead him to making good decisions about risk and reward. His road building techniques and the roads that he originally mapped out by helicopter and snow mobile twenty years ago are safe. His efforts eliminated the need for so many aircraft and flights, and in the process he was able to reduce the company’s operating costs significantly.

We talked about Ice Pilots, another T.V. show chronicling the goings on at Buffalo airways. It turns out that Hugh and Buffalo Joe knew each other well.

Wormhole stop number 6
I’m reminded of one of my days working with the Territorial government in Yellowknife. On this day an old air force transport plane from World War II thundered past my window setting off car alarms. As a vintage aircraft buff, I loved it and that that it was hysterical. In its Buffalo Airlines colours it was now doing civilian duty.

On that same trip I had been given a tour of the town by snow mobile before riding along the ice road on our way to the middle of the lake where we could sip scotch, watch the northern lights, and ponder the value provided by those experience men and women who not only possess skills, but higher value abilities to make good decisions and provide excellent leadership. A thought crossed my mind. The same thought that had occurred to me back at Norfolk Virginia where I had been working with NATO. Perhaps the ice road represents Civvy Street?

Just like in this story, "Moving to Work of Higher Value" often involves rubbing shoulders with adjacent opportunities and connecting the dots along the way. I've done it and It is an interesting way to build a career. It isn't always about arriving at a predetermined destination. 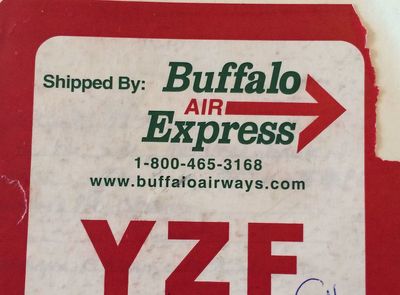